EXUP Worldwide was born from the ashes of the original EXUP Brotherhood – the definitive forum for all those who have interest in Yamaha FZ, FZR, and YZF motorcycles.

Got something you want to say but don't know where else to say it? This is the spot to post it!
Post Reply
21 posts

Kiwi60 listed some old Suzuki's he owned which got me thinking, who's owned what bikes over the years??? I didn't want to hijack that thread so I'll start a new one. I have to cast my mind back but I think I've owned, in rough order:

I think that's it...a few never made it to running stage so they don't count....what's next?? I'm working on gettting an RS250 NF5. I'd like another dirt bike again at some point too, probably a Gas Gas

I don't change my underwear that often, unless you guys are getting close to 80 years old

. Don't you wear out a bike before selling it?
Top

Big Jon wrote:I don't change my underwear that often, unless you guys are getting close to 80 years old

. Don't you wear out a bike before selling it?

OK then, here's the list as far as I can remember it and pretty much in order:

I only kept some of those bikes one month, for various reasons, but I must be getting older (and probably poorer), cause I've has the SV1000S since I bought it new in 2005 and the FZR since 2006

“I venture not to cross that finish line in a neat, tidy well ordered bundle, but to slide across it sideways in a shower of spark’s, leaking oil, hissing steam shouting ..Geronimo !!!!! “

I know a guy who reckons he has had over 100 bikes and can name them all!!

the light is on and guests always welcome
Top

This is the order I had them
Puch Maxi Stepthru My Sisters
Honda CT70 Monkeybike Direct from California
Yamaha FS1E First road bike
Yamaha DT100 Good fun
SuzukiGT185 Not bad
Honda XL250 OK
Yamaha RD400 What a bike
Honda CB550 Good reliable bike
ktm 500 Holy Shit!!!!!!! Scared me senseless
Honda CBX 1000 Wish I still had that one
Then a few years off with kids etc and then
Honda CB750f Crap
Honda VF500f Lovely but like a hand grenade
Kawasaki GPZ500 Twin The reason I dont like Kawasakis
RD350LC with RGV250 Running Gear I got my screen name from it
YZF750 Track Current Bike
1982 Suzuki Katana project with YZF front and back ends and Bandit 12 Motor-------- getting there very slowly
Top

I have everything since the lay off, they just all don't run

But OK, heregoes, I'll put down my very limited list, although, the first two don't really count as they are what I learned on as a kid, but weren't my actual possesions

Did come very close to a Honda CB450S, .... really loved this one and would still really like to get one maybe some day as well as CX650Turbo, or Kawi's GPZ turbo
Love to get some older RZ or RD stuff and go racing. That or some ranko 400 FZR400 or CB-1, we've got a very tight track, it's really a go-cart track.

As I've said before, I've got this strange blue/(or yellow if you're old enough) sickness, not real sure why. It's not like Yamaha has done anything for me lately. But... just always find myself gravitating over to them.. Not real sure why exactly, it's not as if I don't like other bikes either or wouldn't want to ride them. but....
Last edited by sickle44 on Thu Jan 21, 2010 3:09 am, edited 1 time in total.
Michael
Yes Yes I know, I said, I'm building a project YZF1070, K. Well you mix two kids a WCB appeal, bringing a BMW 850i up to snuff & then some, mix in a little depression and .......

K, Yeah, I know excuses are just like a,holes; everyone's got one
I will be starting some day??.
Top

A bunch of legendary bikes in people's lists... some of mine not so
legendary... more like notorious? 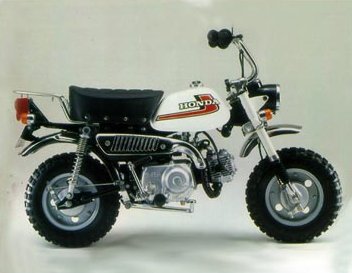 Being first is not always best, but being best is always first.
Top

Come on now Jonny, don't forget, you have the rare treasure of also naming off your Mrs's rides too.

K, Yeah, I know excuses are just like a,holes; everyone's got one
I will be starting some day??.
Top
Post Reply
21 posts