EXUP Worldwide was born from the ashes of the original EXUP Brotherhood – the definitive forum for all those who have interest in Yamaha FZ, FZR, and YZF motorcycles.
https://exupworldwide.com/forum/

It's never that easy, and what I'm proposing exceeds everything that has been done in AU on a sit on bike on salt.

So let us start here:

I picked this seriously munted low km monster a while ago. And this is the starting point, 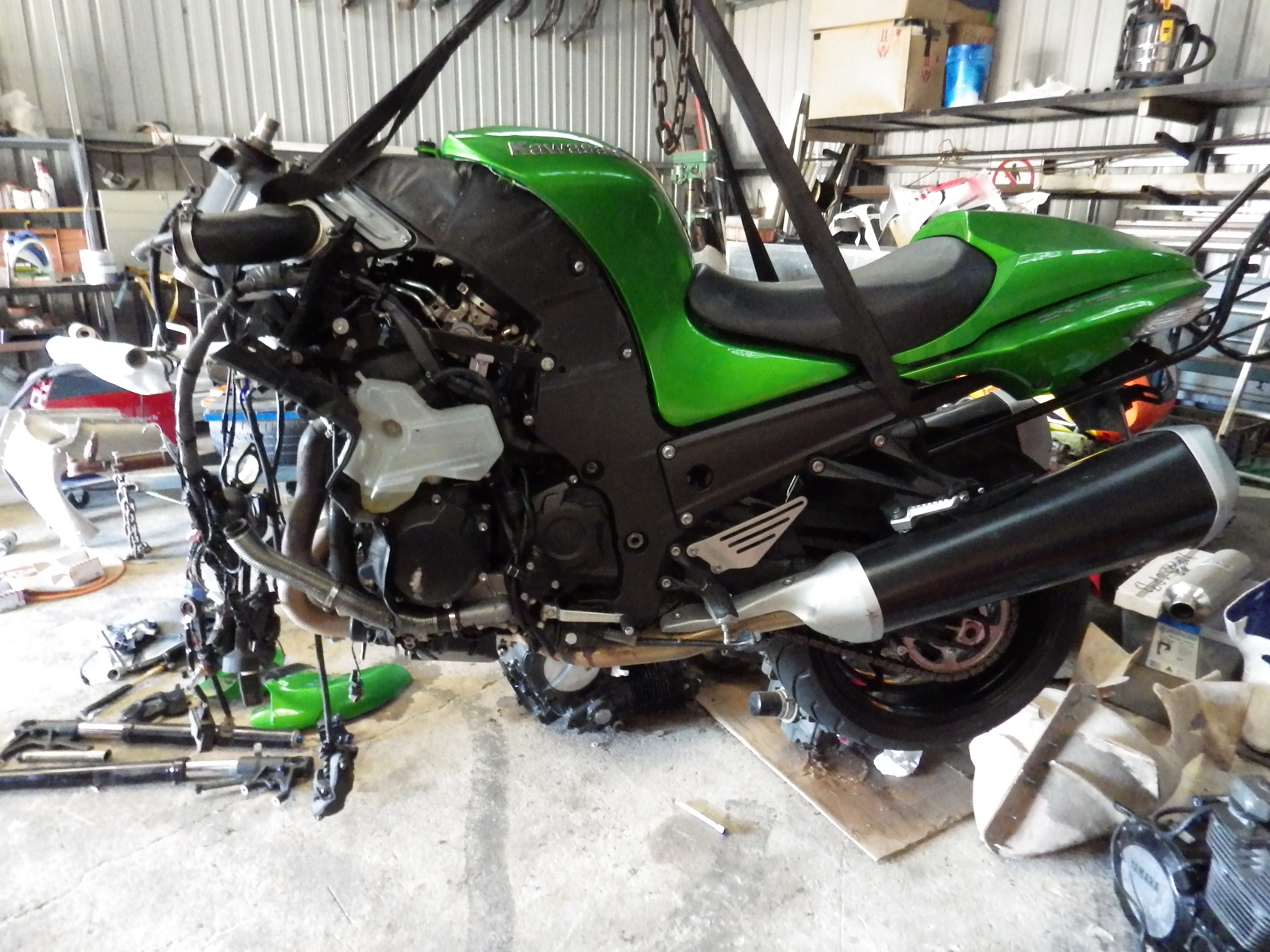 by spook
Some parts arrived today... 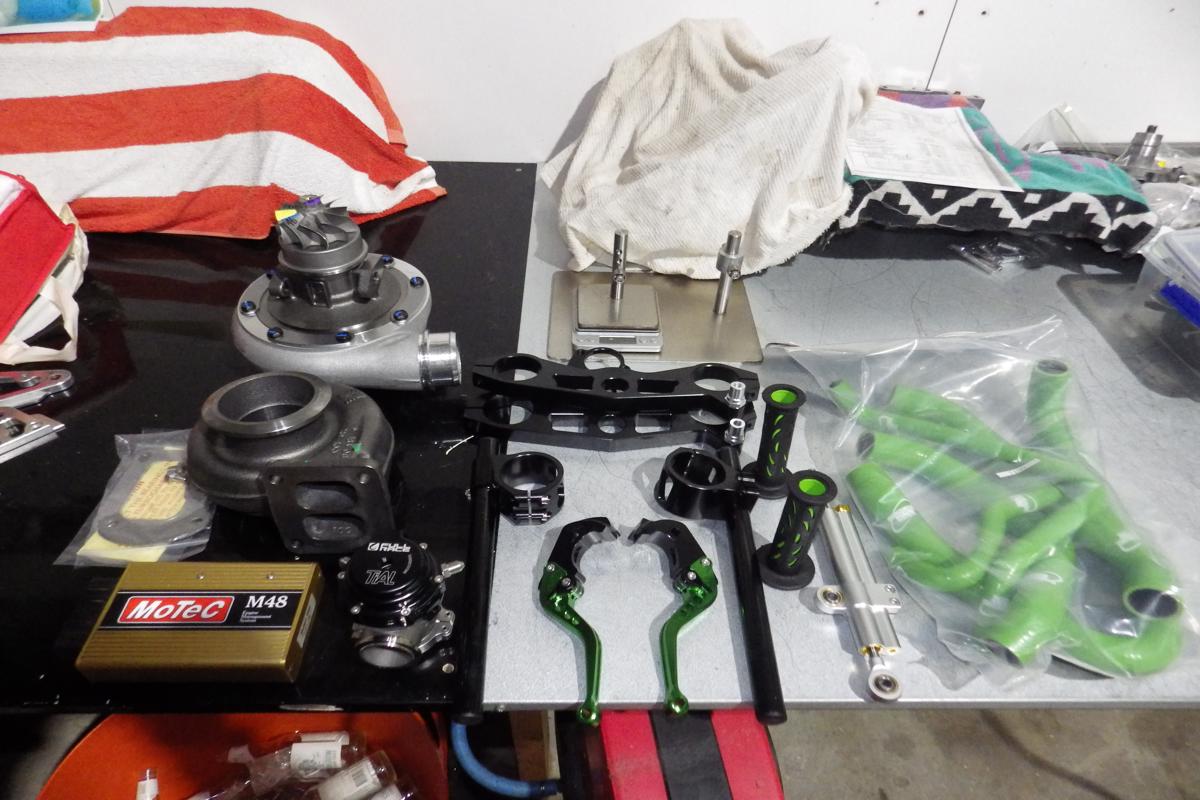 I've decided to buy all new mechanical parts, so I know what I've got from the beginning. The salt flats at Lake Gairdner are 80 miles from the nearest road, and outside of mobile phone range… so the less that can go wrong the better.

I have the low carbon steel tube for the specialized frame, I'm modifying an axle jig for trailers I made decades ago to accommodate the frame construction over the weekend.

I'm waiting on a set of Gen4 ZX10R triples so I can machine the head stock steel (these will take the Ohlin’s forks, once I machine the lowers out 1mm to 56mm) I'm using ZX6R uppers, as these are already 51mm, so perfect.

I'm putting all my best parts on this bike, because I believe that presentation represents your level of commitment, and I am very committed… or perhaps should be committed!

The bike is stripped to bare bones. The engines in these things are massive. If I was doing this again I would go ZX10R, but for various misguided reasons I went for the 14. 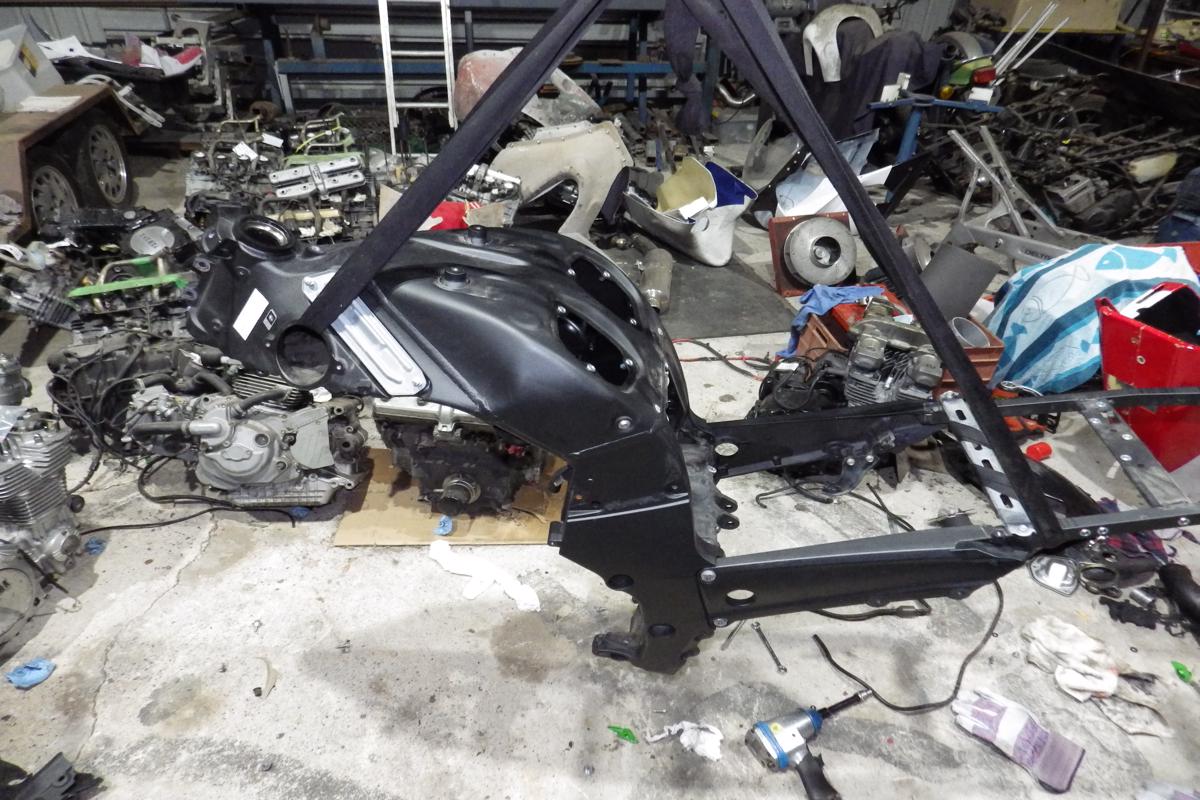 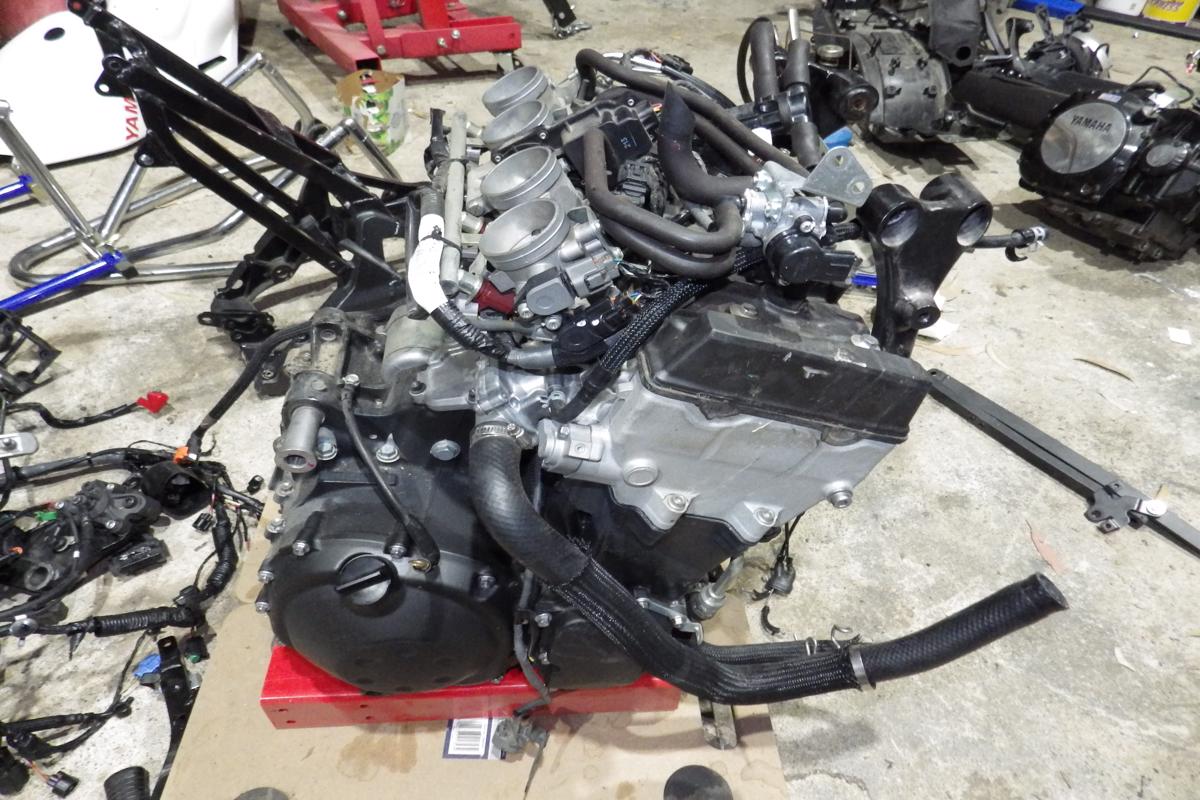 The oem frame will be used to construct the jig for the new tubular frame. I’ll be using the engine as well for fitting purposes. Once the frame is roughed out, I can strip the engine.

I purchased a high spec DC tig, as I want to have one tig welder set for alloy, and one for steel. Find a great setting on each and life is easier and more expedient. 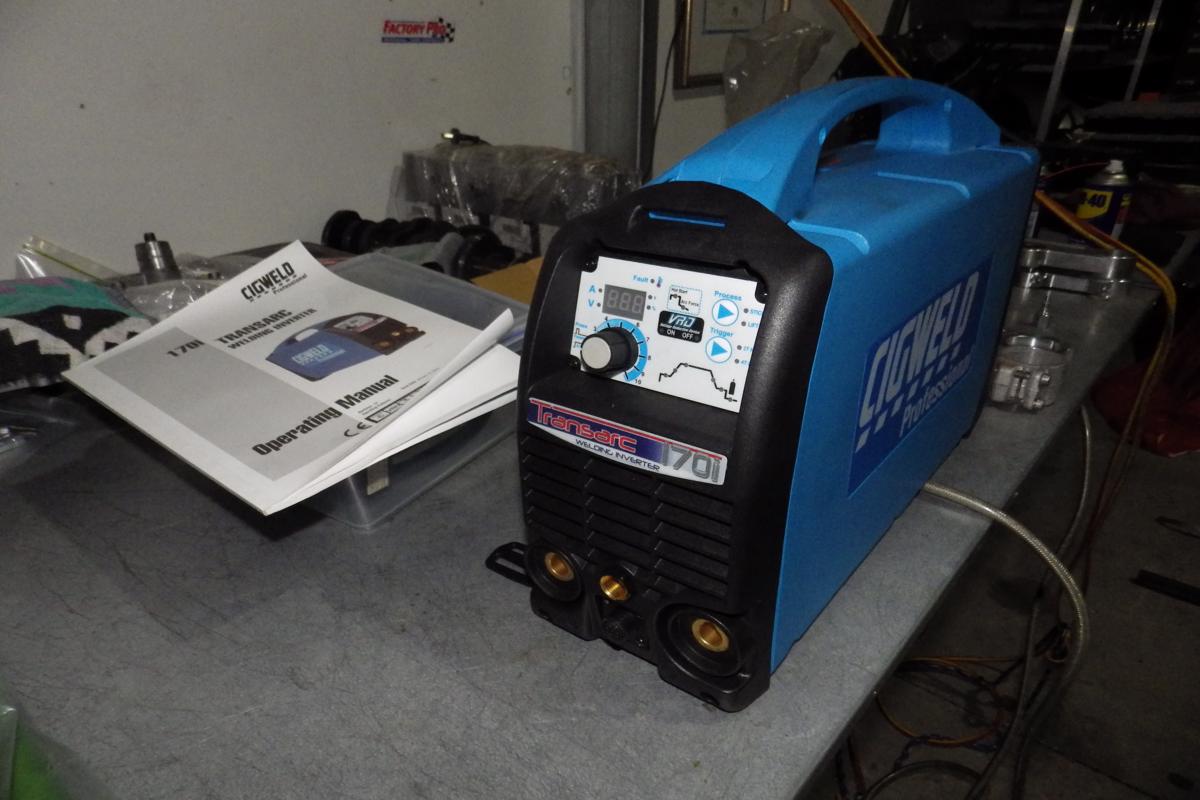 by sickle44
That Turbo is FRIGGEN HUGE!!!, that's gonna be fun spooning into that already intricate and tight pipe work to begin with. 1400CC Yes, HUGE motor, hopefully the turbo will be just fine then.

Nice parts for sure Ralph, looking forward to seeing the rest

I think you made the right choice on the machine btw, reliability and frame rigidity, I think the 1400 is a better choice. Larger footprint to make slippery yes, but once you get the drag coefficient to where it would equal a slippery 1000, I think the extra HP and torque you'd get out of the 14 would offset its extra girth. At 200>mph, I'd be happy to take whatever added stability I could get as well.

I know you aren't doing 1/4 mile but aren't the bulk of drag mod bikes using either a ZX14 or a busa?

by FZRDude
I'm looking forward to the progress and results. Both I know will be worth it!!!

by spook
Thanks Guy's! Yeah the turbo has me a little worried lol!

Being twin scroll, I will have to have 2 waste gates, which adds expense. I'm going to be running somewhere between 1 bar and 2, so boost is moderate. I probably should have kept it simple and gone single scroll... but it is too late now

This project has been a hell of a learning curve.

Just have to pull it together now.

Here's a photo of the turbo... I don't have slight hands!

Ahhh, have a look at that shiny billet compressor wheel! 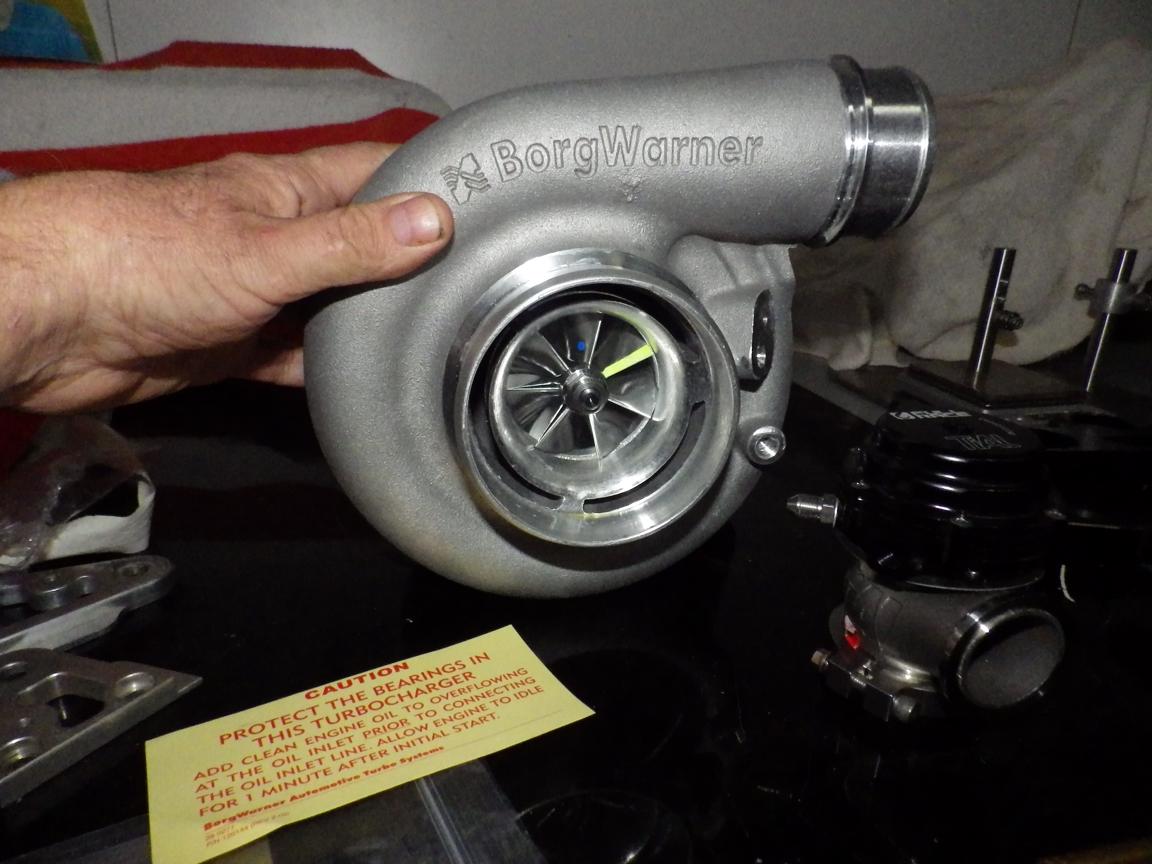 I was thinking about that too, but then thought you should likely be fine as it is twin scroll and it is going on a bike that revs past 10,000rpm, more than 3000rpm past most other engines it might be applied too. I suppose what's really going to be the deciding factor of success or not, is whether or not there's enough exhaust pressure to spool the things up in the first place. Not sure if you've seen the older threads on the guy who Turbo'd his FZR1000 or not? And I think he did it with carburettors to boot for the first bit until he switched out to FI. Are you modifying the fuel system as well?

The E85 should eliminate the risk of det at 107 octane, and cooler explosion.

On the intake side I'm running twin side mounted 600 x 300 x 75 inter-coolers, fed by NASA ducts, with two high volume electric fans per cooler. It'll have a Tial 50 mm recirculating BOV, for off throttle, and Motec compatible sensors.

Exhaust, as I said dual scroll turbo, twin Tial 38mm waste-gates, manual waste-gate bleed valve... the waste gate spring is 1 bar, the bleed valve should allow the waste-gate to operate at between 1-2 bar which will give me up to say 27 psi boost, and that will be more than enough.

I'm going to be running in two classes, partial streamlining, and fully naked. (not me the bike!)... so hp will be important without fairings when pushing against all that wall of drag.

by sickle44
Now that would be one hilarious sight to see wouldn't it. Full slipperfied LSR machine with a buck ass naked dude on it @ 200mph +.

I'm sure you've probably listed all that off once before, sorry if that was a repeat for you Ralph.

Did you say anything about your engine internals and lowering stock compression or not yet? If yeah, I can just scroll up

by spook
Motor will have all starter and alternator stuff striped out, I'll organise a crank shaft side attachment that will allow a remote hand held start on the alternator side.

I'm just waiting on a buyer for one of my kidneys.

I'm just waiting on a buyer for one of my kidneys.

Hopefully you're putting an equal amount of time and effort into the slippery-ness of the rider hump. Sure would be cool to be able to get some wind tunnel time, but..... yeah I know how much of a pipe dream that is...

by spook
Probably more into the Aero, it'll cost me my right nut, and I'll have a bonus new, higher pitched voice as well...

These days wind tunnel time is less important, solid edge for example has a 3D fluid dynamics component that allows you to model the best shape body work with the lowest drag coefficient (Cd).

I'll need to get the frame made, and the bike sitting on it's feet before, I can proceed with that.

As a side note, I've decided to go with water to air intercooling rather than air to air.

by kiwi60
I'm impressed, I'll be keeping a close eye on this thread.

by spook
Progress is painfully slow, because the way I buy parts now is best product for the lowest price

A lot of this bike is coming from china... I just couldn't afford the build otherwise.

I'm not complaining, nor making excuses, everything purchased so far exceeds my quality expectations. The stainless steel 42 mm 90 degree pipe sections I just received are perfect, and a third the price I would pay locally, and probably the same thing. 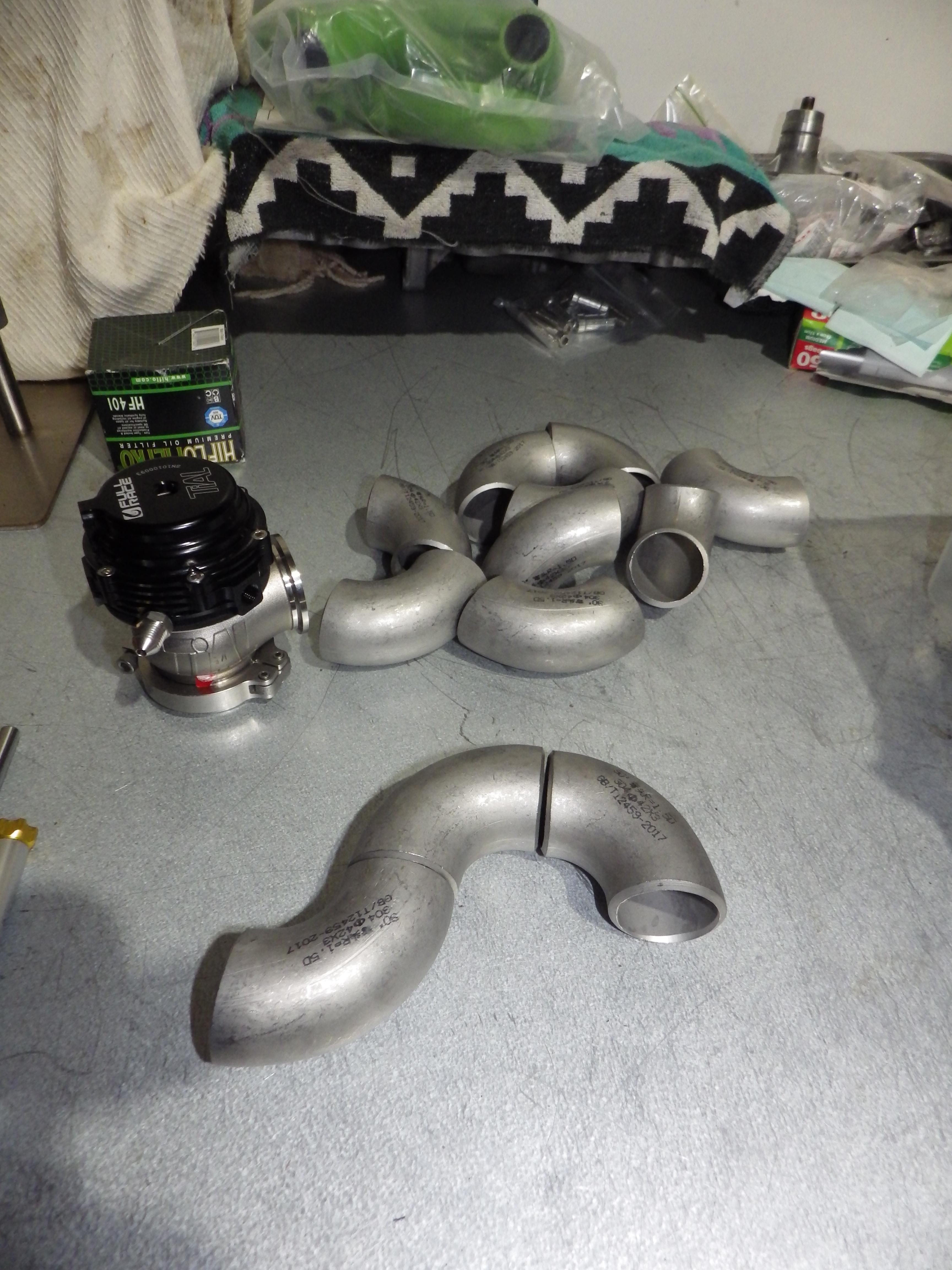 That said, I purchased the Tial waste gate and blow off valve new-second hand off facebook. Had no idea prior to doing some research there is a litany of forged product out there, I've emailed Tial, and they said the bits I bought are legit....

My turbo was bought locally, and is a legit Borg Warner S300SX-E SXE363 (87/76 63mm). haha. Even though after I placed my order I was informed it was coming from the US. Truth is it arrived in four days! FN awesome!

As a famous Australian once said.. such is life.

Fingers crossed on the housing...

by spook
I went to a local supplier to buy some straight 42mm OD pipe to fill the gaps between the curvy bits... Sure enough, the pipe is made in Taiwan.

Need to get some flanges laser cut, and wait for the T04 turbo flange to turn up.

Then I can crack on with the headers! 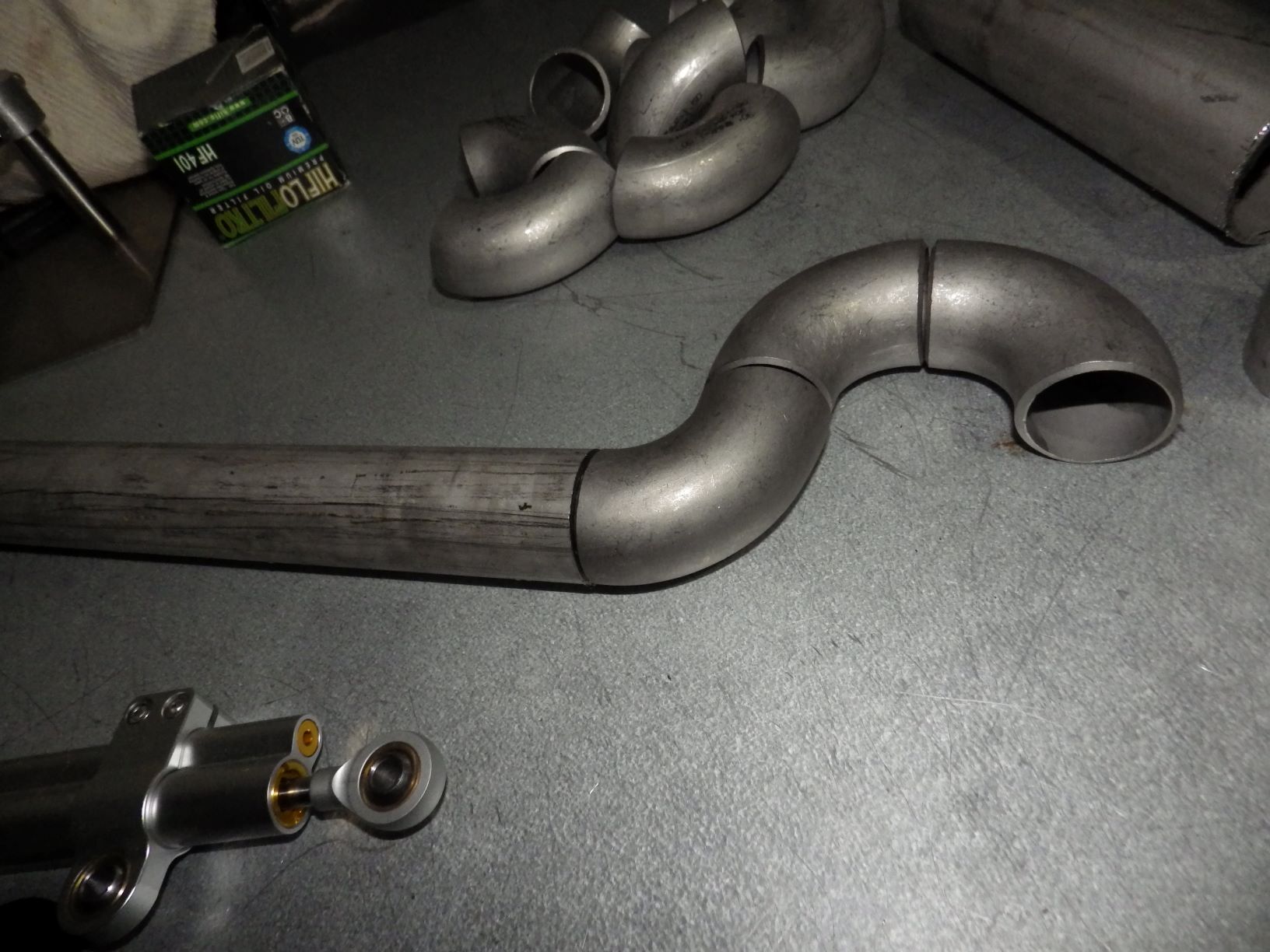 by spook
I will be starting the frame soon, and the turbo headers when I get the manifold flanges cut. (can't find any anywhere at the size I need!).

I may need to move the build inside where the world can't see it... What I'm going to do has not been done before, and I sort of want to keep it under-wraps...lol.

Seriously though, reporting on it is going to create problems.

Here is the 16mm stainless turbo flange, and the tee-pieces I'm going to use for the merge collector. 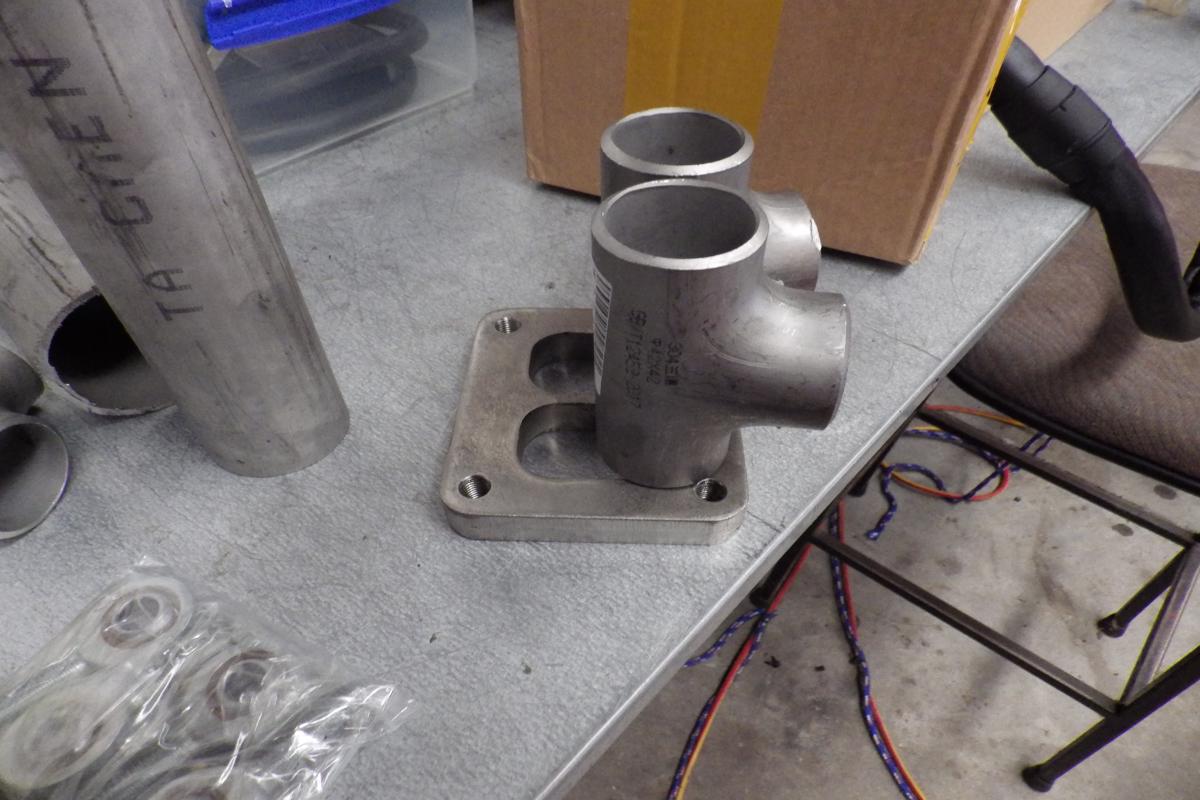 With a dual scroll turbo, the separate 'scrolls' take advantage of the exhaust pulses to create gains in mid range hp. The turbo spools quicker as a result of this configuration. As a result you need to run two waste gates, which is an added expense created by this set up.

I will need to run cylinders 1 and 4 in one scroll, and 2 and 3 in the other. This creates a pretty convoluted manifold... here's and example: 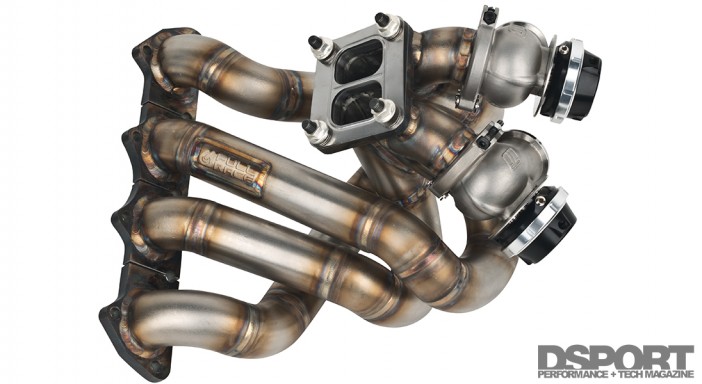